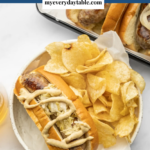 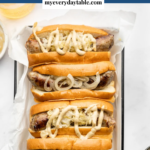 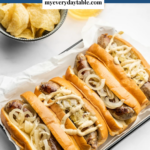 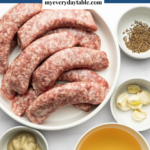 You know what your next game day, fall party, or heck, even a long day at work needs? CROCKPOT BRATS (aka slow cooker brats)! This cozy meal is the perfect way to take a summer meal into the fall and winter and with this crockpot beer brats recipe, it’s just 10 minutes prep and a few hours in the slow cooker. Bratwurst in crockpot couldn’t be easier and I think it’s the best brat recipe ever! Serve them in buns with plenty of mustard and onions for a traditional Midwest meal or with potatoes and sauerkraut for traditional German flavor.

If you love cozy, slow cooker meals (is there anything better on a cool fall day?!) be sure to try my crockpot shredded beef tacos, slow cooker barbacoa burrito bowls, or slow cooker buffalo chicken sandwiches next time.

Have you ever tried slow cooker bratwurst? It’s a great way to make an easy dinner at the end of a busy day! If Wisconsin had a themed meal, cooking beer brats in crock pot would be it. Because in the land of cheese and beer and brats AND easy slow cooker meals…beer brats slow cooker recipes just make sense.

And while I may not live in Wisconsin anymore, it’s definitely a part of the culture I grew up in. My local meat market has no less than 22 varieties of brats. We take it very seriously and from the moment it’s warm enough to step outside to grill (and let’s be real – even when it’s not for some) the aroma of brats are essential to spring/summer/fall nights in the midwest. 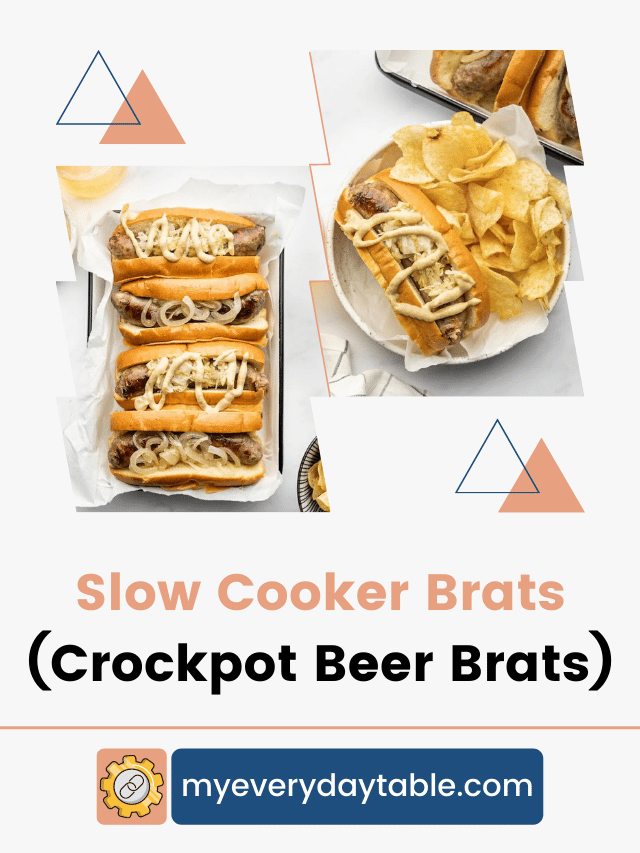 What You’ll Love about Crockpot Brats

How to Make Crockpot Beer Brats

These slow cooker bratwurst are so simple to make!

Can you cook brats in a slow cooker?

Yes! You can absolutely cook brats in a slow cooker. And it’s ridiculously easy, too.

Typically, brats are a warm-weather meal, but this slow cooker brats recipes takes it into fall and winter. Brats, sauerkraut, and potatoes are slow cooked in a mustardy-beer sauce. And though the result may not be the prettiest food around, the warm, comforting meal more than makes up for it.

How long do you cook brats in a crockpot?

The cooking time for slow cooker brats depends on whether you’re cooking them on high or low heat. These crock pot brats cook in about 6 hours on low heat, but if you wanted them done faster, you could cook them for 4 hours on high. Be sure to make sure they are cooked through!

How to keep brats warm in slow cooker without beer?

If you’d prefer to make your crockpot brat recipes without beer, simply swap the beer for a veggie chicken broth.

None of the beer, but you’ll still get flavor.

Store any leftover slow cooker bratwurst in the refrigerator for 3-4 days.

Reheat the brats in a hot skillet or in the microwave until heated through.

Can you freeze crockpot beer brats?

Yes, you can freeze the brats after cooking.

How to Serve Crockpot Beer Brats to the Whole Family

I get it, feeding kids can be tough! But following the Division of Responsibility and knowing your job and your child’s job makes it SO much more enjoyable. You’ll be able to feed your kids any meal, which will help ensure that they are eating a variety of nutritious foods – with plenty of play food sprinkled in. 😉

I think brats work as a family dinner, but if your kids aren’t convinced, be sure to serve a few sides (buns, fruit, milk, etc.) or some hot dogs. 😉

All of my articles on feeding kids can be found here and if you want a FULL list of all of the videos I have with hacks, tips, scripts, and ideas for feeding kids, check out my instagram or tiktok page.

What to Serve with Beer Brats

Wondering what to make with brats for dinner?

You won’t believe how easy these slow cooker brats are. Crockpot beer brats are made with just 6 ingredients and are flavorful and juicy! Photo Credit: All photos in this post were take by Loren at Sweet Rustic Bakes

This post may contain affiliate links. I earn a small commission from purchases made through them, at no additional cost to you. Thanks for supporting this site!