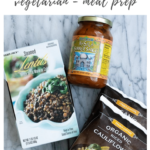 Yes, and the Trader Joe’s steamed lentils are one of my favorite items! While cooking lentils yourself is definitely more cost-effective, if you’re looking for a simple shortcut…and one that will ensure your lentils are perfectly cooked every time, give the lentils from Trader Joe’s a try!

What to do with Trader Joe’s Lentils?

You can also combine it with bruschetta mix and feta cheese for a simple salad that’s incredibly filling and delicious!

I also love using the lentils to bulk up lunch salads.

How to Use Trader Joe’s Masala Simmer Sauce:

Trader Joe’s vegan tikka masala sauce couldn’t be easier to use! Simply decide on your protein, simmer with the sauce, and serve. It’s got the Indian flavors you love, without the overwhelming spice list.

Note: it’s not spicy, so you can add some red pepper flakes to taste if you like a little heat.

**Trader Joe’s Tikka Masala Sauce does contain milk and is made on equipment shared with tree nuts.

Here’s how we make it:

TIP: The steamed lentils from Trader Joe’s come in a block form, and just need to be gently crumbled. I prefer to do this with my hands instead of a spoon or spatula so that the lentils don’t get crushed.

This is totally up to you, but when it comes to Trader Joe’s cauliflower rice, I’ve always had better luck with the frozen variety.

I think it depends a lot on how fast your store goes through it (aka, how fresh is it), but after getting a few bad bags, I transitioned entirely to the frozen cauliflower rice. Then I know it’s fresh and I don’t have to worry about it if I don’t make it right away.

But feel free to use either in this recipe, I’m using 2 servings of cauliflower rice per meal.

How to Store Trader Joe’s Tikka Masala Sauce with Lentils:

If you like this Trader Joe’s masala simmer sauce recipe, you’ll love my other easy trader joe’s recipes: