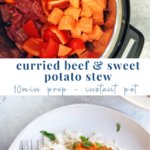 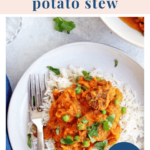 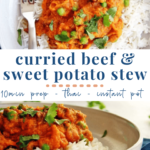 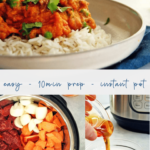 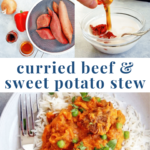 I’ve had my instant pot (affiliate link) for about six months or so and have been playing around with it ever since. I’m not sure if everyone feels this way or not, but I think there is a bit of a learning curve when it comes to cooking with an instant pot. I was super freaked out by it when I took it out of the box. I don’t even know why, but it seems a little complicated! Have no fear though, there are plenty of recipes out there.

So I just started using it. And started with the basics: rice, beans, hard boiled eggs, etc. Then I branched out to recipes, following them exactly as instructed. Then I started playing around and now I feel pretty confident in knowing what will work and what won’t! I love being able to cook rice and grains without paying attention, frozen meat for a quick dinner, AND turning tougher cuts of meat into tender, delectable stews without spending hours to do so.

But my absolute favorite reason to cook in the instant pot is that much like a slow cooker, I love that you can just throw a bunch of ingredients into a pot together, press a button, and return to a complete meal that tastes like it’s been cooking for hours. I’ve gotten a lot of questions about the difference between a slow cooker and instant pot, and while they have similarities, the instant pot is a multi-use cooker, which means it is pressure cooker, slow cooker, rice cooker, steamer, sauté, AND yogurt maker. If you already have a slow cooker, it’s a little harder to justify another appliance, but if you cook a lot of grains and beans and want to be able to cook things FAST, it’s totally worth it. (And that’s coming from a person who doesn’t even have a place to store the instant pot.)

Tougher cuts of meat like beef stew meat are great in the instant pot, because in less than an hour or cooking, you’ve got tender meat that practically shreds itself. Traditional pot roast flavors are great, but I also love adding a little asian twist to beef and this one turned out perfectly! It’s warming, comforting, and satisfying. It’s got protein, good carbs, veggies, it’s a dinner that doesn’t need a side dish. (Don’t you love when that happens?!) This curried beef & sweet potato stew is everything you want in a winter meal.

And all it requires is a quick chop of some veggies, and a quick mix of the curry sauce. Dump everything in the instant pot, and press a button! 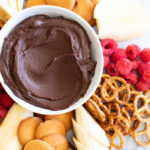