Stuck in a dinner rut and feeling bored and uninspired with meals?
Let me help!
Home » Why I Let My Kids Have Unlimited Dessert
3 shares
Rate This Recipe 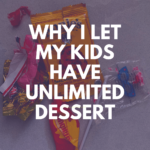 Yes, you read that right. I let my kids have unlimited dessert with dinner. Yes, I care about what they eat (I have a degree in Nutrition!). No, they don’t eat only dessert.

At this point, you may think I’m slightly crazy. But let me explain the why, the how, and the reason behind it! I think you’ll want to give it a try at YOUR house!

All of my articles on feeding kids can be found here and if you want a FULL list of all of the videos I have with hacks, tips, scripts, and ideas for feeding kids, check out my instagram or tiktok page.

Unlimited dessert is done through the lens of the Division of Responsibility method by Ellyn Satter and the roles are really clear. I think it’s very helpful to understand the roles and feel confident in them so that meals can be enjoyed instead of pressuring + bribing your kids to eat the food on their plate AND as a way to give them agency in feeding themselves.

More details on the Division of Responsibility here, but the main idea is that the adult decides what the meal is, where it will be served, and what time it happens.

The child decides what to eat and how much.

I’ve done this from the start with my own kids and I think it’s a huge reason that my kids eat a variety of foods AND that we have enjoyable, calm meals. They aren’t a time of nagging, they are a time of connecting.

So how does it work for desserts? Dessert goes on the plate at the same time as the meal (no cleaning your plate in order to get dessert!) and if they want more, they get it!

Why Letting Your Kids Have Desserts (And Play Food!) Is Important

While I always served dessert for my kids (and served it at the same time as dinner, see the TikTok that got over 1.7 million views on that below), I started feeling like my daughter was feeling a little restricted when it came to desserts. And once I started learning more about the biological responses to restriction through my Intuitive Eating training, I realized that while I thought limiting the amount of dessert they could have was helpful, it was actually making desserts more appealing.

When we restrict foods, there is a biological response that makes us crave and obsess over those foods.

Plus, it’s important to show our kids that they can trust their own body and that their bodies can be trusted around food. Trusting ourselves around food and making peace with food is an essential part of Intuitive Eating, and it’s an important skill to have.

I’m covering the common questions below, but let me know if you have any others in the comments section and I’ll do my best to address them!

What if they eat dessert first?

This is a common question, and once you feel comfortable with your role and the child’s role in feeding, you’ll realize that it doesn’t really matter! You decide what goes on the plate, and they decide what and how much to eat off of their plate.

Many families have told me that once they started offering desserts WITH meals, their kids eat more of the meal. And it makes sense, they don’t have to save room for dessert. They can listen to their bodies and eat the right amount of food at that meal.

What if they only eat dessert?

See above. They get to decide! Doubters often think that this will happen, but this has actually never happened at our house. But if it does happen, don’t stress and remember to look at what they are eating over the course of a week or month instead of what they are eating in that one meal.

Ellyn Satter recommends one portion of dessert, why do you offer unlimited?

This was a reckoning that I started thinking about during my Intuitive Eating Counselor training program. As I learned more about Intuitive Eating and the biological response our body has to restriction, I started struggling with the fact that I was, in fact, restricting desserts a bit. While I felt like it was an appropriate amount, I could tell that one of my daughter’s was feeling a little restricted. She asked for desserts a lot, in a way that led me to believe she was thinking about desserts more than what I would like to see. (It should feel neutral, not obsessive.)

What happened when you let them have unlimited dessert?

What I assumed would happen, did happen. Knowing that when we give ourselves permission to eat whatever we want, the desire for those foods will naturally go down.

In Intuitive Eating, it’s called the habituation factor, which means that the more we have something, the less special it becomes.

So what happened? We had a few nights of eating more desserts than normal (You have to not say ANYTHING! This is hard, but you can do it!) and then it evened out to the portions that I would give them. I think that the idea that they can have as much as they want is actually more exciting than the dessert itself.

Like adults, it will fluctuate depending on day, hunger level, what the body is craving, etc.

What age should you start dessert with dinner?

It’s recommended that you don’t start offering food with added sugars until after two years of age, so that’s the goal!

And don’t stress about kids who have dessert before two on occasion. Or who have older siblings, it’s easier to limit/not serve desserts if there aren’t older kids around to emulate.

Update to Dessert with Dinner (Why I changed it to be an unlimited amount!) 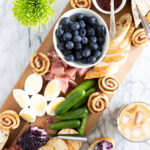 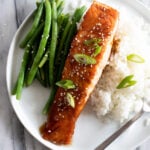