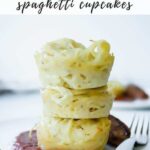 Spaghetti Cupcakes are a delicious and portable meal that come together in 30 minutes!

Spaghetti cupcakes are not my invention. Oh no. As with most of my recipes, I get inspiration from somewhere and then I head to the kitchen to tinker. (BEST JOB EVER!!!) Sometimes it’s cookbooks or magazines, cooking shows or instagram, a meal friends tell me about, or a visit to a restaurant that gives me inspiration to try something new.

But these spaghetti cupcakes? They are straight from our wedding night. We didn’t have a traditional sit-down meal, but instead had stations – each station had a few different items (salad, entree, sides) with lots of passed hors d’oeuvres. One of the items that our catering planner strongly suggested was angel hair pasta cakes. She said that they were a big crowd-pleaser and while I thought it would go over well with kids, I really didn’t think adults would be into it. Because who cares about spaghetti cupcakes when there are so many other (more delicious?!) options to choose from.

What are Spaghetti Cupcakes?

Spaghetti cupcakes are a combination of cooked spaghetti, egg, milk, parmesan, and some Italian seasonings. The mixture bakes in a cupcake tin and transforms into portable little spaghetti cupcakes that can work as an appetizer, main meal or packed in a lunch.

What to Serve with Spaghetti Cupcakes:

I kept things very basic and simple with a side of marinara sauce and a sprinkle of parmesan cheese, but also added some cooked chicken sausage for a boost of protein. Depending on your appetites and style of eating (aka, how much protein do you need?) you may be able to serve them all on their own.

How to Meal Prep Spaghetti Cupcakes:

Get Your Kids Involved in Making Spaghetti Cupcakes:

I love bringing kids into the kitchen to help cook! Getting them involved gets them excited to eat the meal, and the learning – and just connecting in general. You can learn more about my philosophy to feeding kids here.

For these spaghetti cupcakes, I would recommend having the kids help whisk together the milk and egg mixture and then after the muffin tins have been filled with the spaghetti mixture, kids can help sprinkle the tops with parmesan cheese. Older kids can obviously do more!

Don’t forget to tag me (@myeverydaytable or #myeverydaytable) when you make these spaghetti cupcakes! I LOVE to see your creations.

Spaghetti Cupcakes are a delicious and portable meal that come together in 30 minutes!