After thousands and thousands of visits and meal plan downloads, I realized a lot of you were just like me. Frustrated with the gestational diabetes plans found online. The meals felt dated, focused on highly-processed foods, and like “diet” foods – ALL things I was not interested in when creating a healthy environment for my baby.

So I created the ultimate gestational diabetes meal plan guide for YOU. If you’re feeling stressed and overwhelmed with a recent GD diagnosis, you’ll want to grab this guide.

It’s packed with whole-foods focused recipes, easy dinners you can make (and the whole family can eat), and plenty of nutritious foods like lean protein, whole-grains, produce, and more.

If you’re looking for a real food for gestational diabetes meal plan, this is it.

Disclaimer: This post and the easy gestational diabetes meal plan ideas are just that – IDEAS to help you navigate! As always, run everything by your Doctor.

There aren’t many symptoms or signs of gestational diabetes, but increased thirst and urination are possible symptoms according to The Mayo Clinic.

Which is essentially a pregnancy symptom, so I didn’t think anything of my increased thirst and need to use the restroom. 🙂

It can come as quite a shock, but you’ll get through it! When I was pregnant with my second daughter, I failed both the one-hour and three-hour glucose tests, and was subsequently diagnosed with gestational diabetes. I was very surprised to say the least.

I went into a frenzy of figuring out how this happened, what I needed to eat (and not eat), how it would affect the baby, and anything else that I could worry about at the time. I know quite a bit about type-1 and type-2 diabetes, but didn’t have much experience with gestational diabetes until it happened to me! Now that I have lots of practice and personal experience, I hope that I can help you eat well through your diagnosis. Here’s some helpful background info about gestational diabetes from Mayo Clinic.

What to do After A Gestational Diabetes Diagnosis

Breathe: The upside of being diagnosed with gestational diabetes is that you can now make sure your glucose levels stay within a healthy range – good for baby and good for you! And this is definitely something to be grateful for.

And the diabetes will most likely be over in a matter of months. Stress can affect blood sugar levels, so don’t stress about this, and find ways to minimize the stresses in your life. Meals, snacks, and food will take up a lot of time, so maybe it’s getting help with housework, childcare, working less, etc. (Easier said than done, I know.)

You’ll go see specialists. Write down all of your questions and concerns – they have all of the answers! After my gestational diabetes diagnosis, I was referred to both a Doctor and a Registered Dietitian who specialize in gestational diabetes. I was surprised when they recommended that I start testing my blood sugar – even before I saw them – but it’s easier than you think and the first prick is the worst. I promise!

Your dietitian will determine how many carbs you should be eating and will help you find a diet that works for you – and make tweaks when necessary. Your Doctor will monitor you lots, which can feel worrisome at the time, but it is all worth the extra precautions and many hours spent at the Doctor’s office. Upside: you’ll get to see and hear your baby a lot!

What to Eat: I love food and I hate diets, so the restricted diet was the hardest aspect for me. (I wrote a little about this here.) It’s not that the diet you’ll follow doesn’t allow carbs (quite the opposite!) but they do need to be the right carbs, counted, and eaten at the right times.

I wasn’t thrilled with what I found after some internet searching for gestational diabetes diet plans, so that is really the reason for this whole post. I eat a diet that consists mostly of whole, real foods and I wanted that emphasis to continue. Obviously you’ll need to follow whatever recommendations you get from your Doctor and/or RD, but here are some meal ideas (staples in my gestational diabetes diet!) to get you started.

How many carbs in gestational diabetes diet?

This answer is going to depend on YOU. When you go visit your Doctor and Dietitian, they’ll give you a range of what you should be aiming for. Everyone is different so there is no strict number on this one.

Because my body was very sensitive to carbs, I was on a pretty strict gestational diabetes diet plan of:

**Remember, these aren’t necessarily the levels that YOU will follow, just wanted to give you a general idea.

Rumor has it that it’s our fault for getting gestational diabetes, but that’s WRONG! According to Hopkins Medicine:

Although the cause of GDM is not known, there are some theories as to why the condition occurs.

The placenta supplies a growing fetus with nutrients and water, and also produces a variety of hormones to maintain the pregnancy. Some of these hormones (estrogen, cortisol, and human placental lactogen) can have a blocking effect on insulin. This is called contra-insulin effect, which usually begins about 20 to 24 weeks into the pregnancy.

Eating Out with Gestational Diabetes

I kept things simple when eating out, but we ate at home a lot. Partly because we have a toddler and don’t go out much and partly because I like to sample and share food when I go out, and that makes tracking carbs a little tricky! When we did eat out, I relied on entree-sized salads or protein (usually fish) entrees with low-carb sides (veggies, coleslaw, etc.).

Activity levels definitely play a role in glucose levels, so stay active and if you aren’t, get out walking! I made an effort to get out for short walks at least twice a day. You don’t need to be running 5 miles to see an improvement – so it’s worth it!

It was also recommended that I take a walk after dinner if I had high readings, but I honestly didn’t do that this much as I was usually exhausted at the end of the day.

A common question is, will I have to take insulin? And it will totally depend on your body. Many women are able to control their gestational diabetes with dietary changes.

I was not one of those women, even though I was incredibly diligent with my diet and carb intake.

I share that because it’s important to note that even if you follow your gestational diabetes diet plan perfectly and do everything right, you still might not be able to control it on your own, and may need to take insulin.

When I had to start taking insulin, I was so disappointed and frustrated, but later realized I didn’t need to feel that way because it wasn’t an indication that I was doing a bad job. My body just wasn’t able to produce enough insulin on its own. The beauty of having another human in the equation is that you are forced to get over yourself and your own issues. 🙂 (And sometimes it helps to have a therapist who can point that out like I did!)

Does Gestational Diabetes Go Away?

In most women, gestational diabetes goes away right after delivery. This would be a great question to discuss with your Doctor if you are concerned.

In my case, I was able to guzzle down a huge cup of juice (It’s a Cedars-Sinai special!) and my blood sugar didn’t spike. (I tested it because I could hardly believe it.)

Onto the recipes for gestational diabetes during pregnancy…but if you need to have a pity party or complain to someone…you know where to find me! 🙂

Here are a few ideas for some nutritious breakfasts. Depending on your carbohydrate recommendations, you may need to adjust some of these recipes to fit your own guidelines.

These gestational diabetes lunch recipes are designed to be prepped ahead so that you don’t have to make them each and every day.

Simple and quick dinner ideas for gestational diabetes are a must, and here are a few favorites:

Check out my cook once, eat twice recipes to really maximize your time in the kitchen.

If you’re after some snack ideas that are designed to keep your blood sugar balanced, grab my list here:

Click here if you’re looking for a done-for-you gestational diabetes sample meal plan (I know I was!) that has breakfast, lunch, and dinner recipes along with FAQs, tips, and a 7-day sample meal plan. 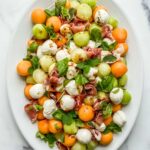