Two down, 5 to go! I was wondering last night if I could count wine as a condiment…

Lunch: More bread… Lunch was delicious but I was still hungry after eating it. Overall, it contained protein, healthy fats and vegetables but if I were to have something similar normally, I would change a few things. I would normally use the entire can of tuna over a huge bowl of salad greens and other raw vegetables with some whole grain crackers on the side. I’m not sure if it is the lack of volume from the vegetables in these meals that isn’t filling me up or smaller amounts of protein and fiber…maybe both?

Snack: 10 saltine crackers (only thing I had at work!)

I wanted to stop by the grocery store to pick up a few more vegetables, possibly fruit and SNACKS but I was running late and needed to get home to the dog (we are dog sitting)…is this what it is like to be responsible for someone or something else?! 🙂

I had a few more crackers with some cheese as it was my only snack option. (Originally I mixed some beans with a bit of cheese, but I couldn’t do it, so bad.)

Dinner: Has an interesting story. We were at the meat counter shopping the other day and I noticed a yellow sticker that read “$.99 special!” and found a pound of ground bison a day away from the use or freeze by date, so they had marked it down to 99 cents! I originally picked up one of them and was going to use it instead of the chicken sausage I had planned on. It turns out that the one pound of chicken drumsticks that I was planning on getting ($1.48/pound) were only available in a value pack so they were way out of the budget. I ran back to the meat/fish counter and they had one more pack of the ground bison left so I grabbed it! We totally lucked out, I have no idea how often you can find these sort of deals, but I would doubt very often.

I was still a bit hungry after dinner so I had 4 more saltines with some peanut butter. I know that yesterday I said the saltines were tasty, but I’m kind of getting sick of them now…

Would you guys like to see another day or two of the SNAP Challenge meals? I don’t want to bore you, so let me know! I would also LOVE your suggestions for cheap, filling snacks! 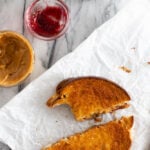 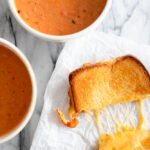