Stuck in a dinner rut and feeling bored and uninspired with meals?
Let me help!
Home » 5 Easy Ham and Cheese Lunchbox Ideas
0 shares
Rate This Recipe

Think ham and cheese is limited to a cold sandwich? Think again! This quintessential combination is as versatile as it is delicious and I’m going to show you how to turn ham and cheese into five different lunch box meals. You’ll get a different meal each day, without having unused ingredients go to waste OR spending a ton of time to make it happen.

I’m so excited to partner with Minnesota Pork to bring you these ham and cheese lunch box ideas! Pork is both versatile and healthy and we love including it in our family meals on a regular basis! (Especially in the form of ham.)

Did you know that there are more than 3,000 pig farms right here in Minnesota? These farmers care about their animals and the planet and you can learn more about the pig farming happening in our backyard here.

Thank you for supporting the brands that help bring you this free content. 🙂

Make up a batch of ham and cheese sliders and eat them throughout the week. It’s sweet and savory and a super-satisfying meal. It’s also 100% delicious for a weeknight dinner.

This is another great make-ahead option for rushed mornings. Bring your kids to the kitchen to help whip these up and then eat them throughout the week for a protein boost for breakfast, lunch, or a snack! They freeze well and can be reheated in about 30 seconds in the microwave.

This is a favorite at our house! For everyone because it’s the easiest for the person packing (Hi, that’s probably YOU!) and for the kids because who doesn’t love a snack plate meal? Don’t feel guilty about a lunch that’s this easy, it’s just as satisfying and nutritious as the others.

Make your own crepes or buy the frozen ones for a meal that comes together in just a few minutes.

Like a hot ham and cheese sandwich with tortillas instead of bread! 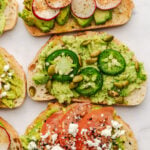