Stuck in a dinner rut and feeling bored and uninspired with meals?
Let me help!
Home » 3-ingredient stuffed mushrooms
3 shares
Rate This Recipe

Surely you can only be thinking one thing by this title…

Quick run-down on Sandy if you aren’t familiar with her (ahem, Mom): she often makes a meal on her food network show out of various packaged foods. Think cookies with cake mix (I’m guilty of that one), risotto with condensed soup (definitely not guilty, ew) and martinis called white knight-ini. Many people have a strong dislike for her, and while I’m not really a fan, she’s pretty harmless. 🙂

I saw “stuffing mushrooms” at Trader Joe’s and immediately thought about how easy stuffed mushrooms are to make. They always seem like such a treat too! The easiest way to make them would be to stuff them with one of the many spreads they have at Trader Joe’s and pack it with a little spinach so I did just that.

So you combine the spinach and a spread (I went with the Blue Cheese & Roasted Pecan), stuff it into the mushrooms and bake. So easy it’s kind of ridiculous and definitely considered semi-homemade. I almost went with the frozen spinach artichoke dip since it would be even easier, but I thought I’d mix it up a bit – choose your favorite spread! If you had some bread crumbs in the cupboard, I’d sprinkle a few on top of the mushrooms, but they definitely aren’t necessary.

Remove stems and wipe down mushrooms if necessary.

Defrost spinach and squeeze out ALL excess water. (Important step or they will be mushy)

Bake for about 20-25 minutes until golden brown on top.

Spill it: Are you a Sandra hater or do you appreciate her “semi-homemade” recipes? 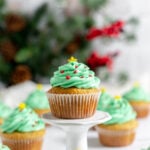 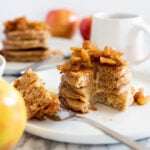